A. Q. M. Badruddoza Chowdhury was President of Bangladesh 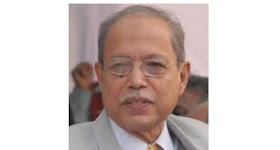 His father, Kafiluddin Chowdhury, was a political leader of Awami League and served as Minister in provincial cabinet of the then East Pakistan. Being inspired by Ziaur Rahman, the founder chairman of the party, he entered into politics as the Secretary General of Bangladesh Nationalist Party (BNP) during its early years. He won the parliament election of 1979 as a BNP nominee from Munshigan and served as cabinet minister during the years 1979-1982. When the Bangladesh Nationalist Party again won parliamentary elections in 1991, after a short stint as Education Minister, he was appointed Deputy Leader of the House of Bangladesh parliament under the leadership of Begum Khaleda Zia.

In 2001, during the second spell of Khaleda Zia's premiership, Chowdhury became foreign minister of Bangladesh. Shortly afterward, in November 2001, he became the President of Bangladesh.